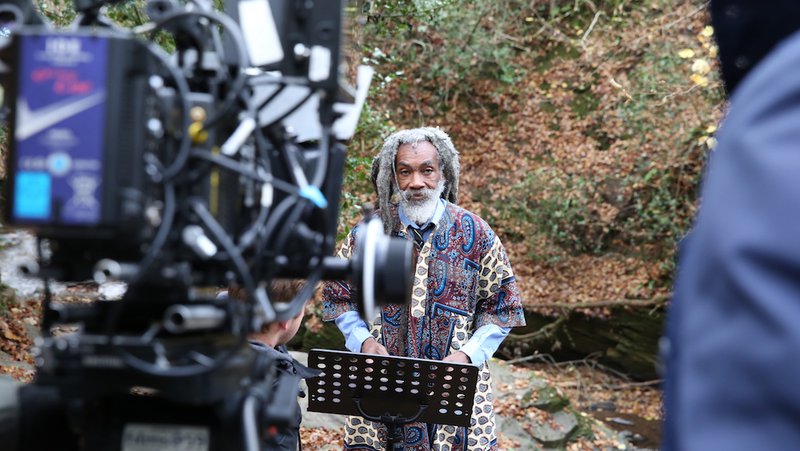 A story that must be told not only because it’s shocking that this actually happened but also that no police officer has been held accountable.

‘I am Judah’, a cinematic documentary film about an Easton community elder ‘Ras’ Judah Adunbi.

In 2017, police mistook Ras Judah for a crime suspect and was brutally tasered in the face while he was walking his dog. The officer who discharged the taser was found not guilty at criminal trial and in September 2018 was also cleared of misconduct.

If it wasn’t for Ras Judah Adunbi’s neighbour, Tom Cherry, we might never have known what really happened. Tom was there to record the incident on his phone in January 2017, so the story, capturing this moment, also begs questions about how we respect, even notice other people in a modern, diverse, multiracial city.

Millions watched the phone footage on mainstream news reports and over social media causing international outrage. He was tasered while standing up for his legal right to not give his name when stopped.

Ras Judah is a beloved and highly-respected elder in his community in Bristol. The whole community remains shocked and unsettled by how he was treated.

A twist to the story is that this was not the first or the last time that Ras Judah has been a victim of police harassment and violence and so-called 'mistaken identity'. Ras Judah is determined to speak the uncensored truth of what has happened to him, not only for himself but for all the other victims of these types of injustices.

The film isn’t a documentary expose, but a deeper exploration of the meaning of identity through one man’s eyes, with a completely independent approach. Using verbatim script, poetry and cinematography to reinforce a deeply personal narrative, Director Bashart Malik is joined by University of Bristol policing lawyer, Dr Clare Torrible, to highlight how institutional bias, system failure, and a lack of mindfulness led to a violent incident at Ras Judah’s home, and the subsequent undermining of the trust systems we expect to live by.

The film aims to engage a wide audience and send the message that institutional racism and injustice continues to be rife.

“The way we have been treated by those who should know better—police, local authority, government—it warrants exposure” says Ras Judah. “We know unlawful acts have been conducted in this country and it’s been going on a long time.”

“It’s not about me as an individual” he continues. “I’m talking about what’s happening up and down the country to other people. My story needs to go to people that matter: people suffering, people less fortunate. It’s for future generations coming through.”

“What researching this project has brought home to me is the fear that is engendered when people feel that the police is not held properly to account,” says Dr Clare Torrible, University of Bristol.

I am Judah will bring the full story to light of a man who throughout his life has had to fight.

Lee Lawrence was 11 years old when he witnessed the shooting of his mother Cherry Groce by police, sparking the 1985 Brixton riot. When she died in 2011 Lee campaigned to obtain justice, culminating in a full public apology and accountability by the Metropolitan Police. Lee is the author of “The Louder I Will Sing”, a qualified mediator and Restorative Justice facilitator looking to share his story and the benefits of alternative dispute resolution. He founded the Cherry Groce Foundation to make a difference to the lives of ordinary people who are faced with extraordinary challenges. Lee is also a Trustee at The World Reimagined.

Lawrence Hoo is a poet and educator based in Bristol. His work is known for throwing a powerful light onto the overlooked experiences of those living in Bristol’s under supported communities. It also evokes the inspiring, under celebrated histories which are the inheritance of Bristol’s immigrant communities. After a youth spent in and out of the care system, Lawrence developed an uncompromising poetic voice, and a calling for working with people from disadvantaged backgrounds, whose experiences he had lived himself.

Lawrence is a founder member and creative lead at CARGO Charting African Resilience Generating Opportunities an arts and education platform.

Having run retail, video production and web and graphic design businesses over 27 years and at the same time working in youth engagement through schools, youth offenders and young peoples homeless units, he is now applying this culmination of experience and intellectual capital to our civic and social development.

As a father, he now desires for our young people to gain the critical thinking skills that can successfully navigate them through life. His intention is to enable by conveying the keys to shift from being unguided missiles to passing on a GPRS to become guided missiles.

Cleo Lake is a community engagement professional, researcher, has been involved within the arts and culture sector for over two decades and is the former Lord Mayor of Bristol (2018-2019). During her term as a Green Party Councillor, Cleo supported the Justice For Judah campaign and was a persistent voice in advocating against austerity and in support for marginalised communities. Cleo was instrumental in getting a Reparations and Atonement motion passed at Bristol City Council for Bristol’s role in the Transatlantic Traffic in enslaved Afrikans and last year was the lead researcher for the Legacy Steering Groups ‘Project TRUTH.’

This screening is supported by The World Reimagined a UK wide charity connecting shared British history and the contemporary quest for racial justice. theworldreimagined.org